: In this topic, post the stats vids, artwork, and/or
snapshots of all of your characters seen in the Gurhal Universe.
This ranges from any Phantasy Star game; genesis to PSP. Mostly
PSU, PSO, PS-Zero, or PSP would be appropriate however. I'll start
with my own.

Overall notes: This character is related to me IRL but taller, has my personal unique nickname, a little more arrogant-sounding than I am directly when attacking something, and of course is a cat. I've taken some changes in PS-P2; voice change is much better than before (though the Japanese type was the best), the outfits are better looking, and I managed to fit a full name in. On the con-side however, my weapons roster also changed along with a major blow to my Technique Arsenal. Ranged Mags plain suck in this game and don't even make a peep anymore or have a homing attack/aim, and the removal of the shield spells was a serious blight in the game which needs it most of all; the enemies and bosses are smarter, faster, stronger, and way more vicious than ever. Halved amounts of items is a serious blow as well (I forgot to rant about this to Sega!), but at least if losing the one extra life (Scape Doll), but staying alive to extract retribution against the SEED doesn't count as a death anymore, but only ONE life? Well, in PS-P1, I seem to have bad luck on finding rare items compared to my '2nd-self', but even if it's hard for me to find cool stuffs, it's even harder for the SEED to kill me there. A bad change in PS-P2 is that it seems to have gone backwards now; I do find rare things, but can easily get kicked around like a helpless kitten (one-shot kill Mecha-Fartz! Dear GOD, Oh NOES!!!

)
Both my original character along with my 2nd and all-time favorite have the same voice types, but Arala's voice pitch is a bit higher.
Artwork coming soon.

Type-2 (Phantasy Star Portable 2):
Title: "Sayo's Friend" (<- LOL! Yes, her from rival to friend instead.)
Level: 87
Mirage Blast Drive: Brilliant Haven and Icy Gust
Favored Style: Vangard (16) or Force (10)
Favorite Element: Light, Fire, and Ice(?)
Start Type: Reincarnated (both from the first game & demo: lvl.15)
Total Progress: Normal-Side Cleared (60%)
Current Progression: Active, but Too weak! Going a bit slow right now (Leveling, etc.)
Ending Personality: Unknown (didn't make it yet. Aiming to be going on her best behavior however)
Favored Weapons: Lance, Greatsword (Scythe in her hands again!), Single Claw (backhand-slapped Dulk Fakis: Final when she was too slow on summoning and was immune to its Meteor Kill, lol!), Gauntlets, Dual Claws, Longbow, Rod, Slicer, Shield
Random: Rather stout this round, Arala Cran seems to not care about getting punched across the face as much as she did in PS-P1, though it still does hurt her, a LOT... seems that she developed some resistance along with a bit of a chip on her shoulder here, lol.

Overall Notes: Actually, Arala now looks quite close to what she was supposed to in Phantasy Star Portable 2, too bad still not enough since for one, I haven't found a good enough of a matching dress for her yet, and second is her hairstyle is off of Hatsune Miku (complaining people: "Not another Miku!" w/e., else if I can care less since I kind of like her too), having the headphones covering her ears, but perhaps she's listening to the BGM, lol. Seeming to be into a certain... something... well I had fixed her figure to be more of the attractive type since she naturally was anyway, but on another factor I guess her charm rate also gives her a high chance of finding lots of rare items before I do; she managed to get Nozdiga in PS-P1 right on the first go, and I haven't found a copy of it for my original in-game self yet, let alone I guess the game seemed to catch a hint even before Sayo made an appearance... as if planned out, Arala found a scythe which is just perfect for her around an early phase of the game too... left right in the open for her taking! Also, her luck of finding items hasn't changed in PS-P2, but now it also causes her to get dragged into red alert Urgent Missions, or maybe her appeal just might earn her a ideal date with Orga Dryan (Oh noes! Extra Boss trouble!) as there was almost never a day she missed having to fight him. Sadly she can't use the favored shield spell anymore either.

ShiroiRen
(PSO)
Group: Shikigamis (personal created group; the team flag has Arala on it, lol)
Group Underlings: 01
Type: FO-Newearl
Favorite Weapons: Soul Eater (Scythe), Sting Tip (wand), Spells, Railgun (side-arm, not actually favorite since I miss with it, a LOT)
Level: 76
Favorite Element: Ice, Fire, and Thunder
Mag: Bhrima (Lvl.200)
ID-Type: Yellowboze
Random: Plan on making custom "skins" for her in PSO to look like Amy, Arala, or White Len. So far seems to look like Amy from Soul Calibur, hence I left the avi here. Amy's look might be easier to make if and when I can get the right software to edit bigger things in the game. 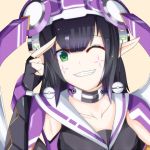 Notes: Well, I did say that I would keep the story behind myself intact did I not? So this is the latest reincarnation of me; changed from a Newman girl, to a beast, then right back to true Newman self again but with extra ears (like Len

There is yet a secondary appearance who's much taller but it's still me yet without the Katakana in name.

Len (or Ren)
(PS-P1)
Voice Type: 2? (don't remember well)
Level: 47
Total Progress: Incomplete (40%. Stage 6.2?),
Ending Personality: Unknown (Ren never made it to the end),
Current progression: retired (will be rare if she does go there anymore now)
Favorite Weapons: Gauntlets, Rod, Wand, Greatsword, Axe (OMFG!), Longbow, Single Dagger, Saber
Random: Len is the smallest player character to ever appear in Phantasy Star, lol! Tiny little cat who loves to use the big weapons twice her own size, but hates getting stepped on by overly sized robots.

Len? (Wrong! AKA: White Len!)
(PS-P2)
Title: "Mind's Eye"
Voice Type: 12 ("Humph! Too Slow...")
Level: 20
Favorite Style: Force lvl.5
Total Progress: Incomplete (8%, Stage 2.0 not started yet)
Ending Personality: Unknown (not even close)
Favorite Weapons: Gauntlets, Single Claw, Dual Claws, Saber, Greatsword, Rod, Wand,
Random: can we say... "Len's gone wrong here!" ? Lol. Yes, this is a mistake just like when I did the same thing in Soul Calibur: Broken Destiny, this is the wrong cat; it's actually White Len, but since the hair ribbon even in the wrong place of her hair was black, the rest of her dress is the same as that of Len directly, black & blue, but her face tells a different story! Most likely White Len will be oriented for the "In your face!" up-close-and-personal type of fighting, even though still tiny.

Overall Notes: Sorry to say, but Len is better in Phantasy Star Portable 1 because of her voice type because she still kind of talked, but not as much. In PS-P2 however, this went wrong; since all of the girls' voices in PS-P2 are more energetic and/or serious along with a hint of arrogance, Len has been replaced with White Len instead... under her colors. So if anyone spots a tiny girl by the name "Len", running around with a huge sword and is often speaking rather arrogantly over every attack or the like, that's actually me using White Len instead because the import went wrong.