The "do NOT!"'s of Phantasy Star (and Monster Hunter)

The "do NOT!"'s of Phantasy Star (and Monster Hunter)

: Out of a laughing defeat I taken last night, I decided to purposely make up a "Fail" series video collection of bloopers. I'll be using some silly effects to hype things up for laughs, but this is mostly for the laughs, not skill or quality.

For now, I'll make a blueprint listing of what types of "fail" actions I'll be doing on purpose.


Rule No. 01: Do not go laughing in the face of a evil shark at a distance from him. (unless you know that you're overpowering them)

Rule No. 02: Never dive into a Stratolva's "Thunder Spear" attack, no matter how strong you are! (I did and killed him and died at the same time, flew across the horizon and lost a life but the mission was complete?)

Rule No. 03: "I am the great 'Go Vahara!' Do not turn your back to me!" (or face pain from either him or his reinforcements at A-Ranked stages!)

Rule No. 04: Never charge a charging Koltova (especially Distolva!) or Bullfango who's at your level or higher. (lol! I did that and we both went flying separate ways on our faces.)

Rule No. 05: Don't flirt with them Astarks, even if they're sexy. (Yes, the most powerful and annoying enemies from Phantasy Star Online Episode IV are back, and they have new moves to boot!)

Rule No. 06 - V1: Don't panic and run around in fear when Orga Dryan takes liftoff without looking out to the sides for at least 2 seconds (see what happened to poor Arala Cran when she panicked)

-- 6.2: but never stand in one spot too long if you don't see anything either (lol! He took out Luce on that one. One-hit kill ninja-fart!)

Rule No. 07: Make sure you're wearing the right "armor" for the club (don't use the wrong elements!)

Rule No. 08: To forces(mages), "If they die, they die." -says Lumia. (She's heartless, but she's right. Dive in to save them by trying to heal them and it might cost your own buttside, especially around extremely LARGE Synth-commander units/Seed-Bosses! Resurrect them later or wait and play safe!)

Rule No. 10: "Kill me once, shame on you! Kill me twice, shame on me..." (will add a purposely done-in scene, and maybe even a fake "game over" screen for the laughs.)

Rule No. 11: Size matters! (Len fails at fighting huge robots. Not being a chump, and I love her too even for another girl but I have to show someone who's the smallest character in Phantasy Star facing off something x10 their size and what happens. Of course I'll have her get a swift vengeance as well.)

Rule No. 12: Size does NOT matter! (The fan will move you, no matter your size! Gotta take three scenes here!)

Rule No. 15: Never laugh at, nor charge at a charging De-Raggan or Rathalos, period!

Rule No. 16: Please don't kick a Booma in the pinecone, it's considered rude. (Screenshot!) 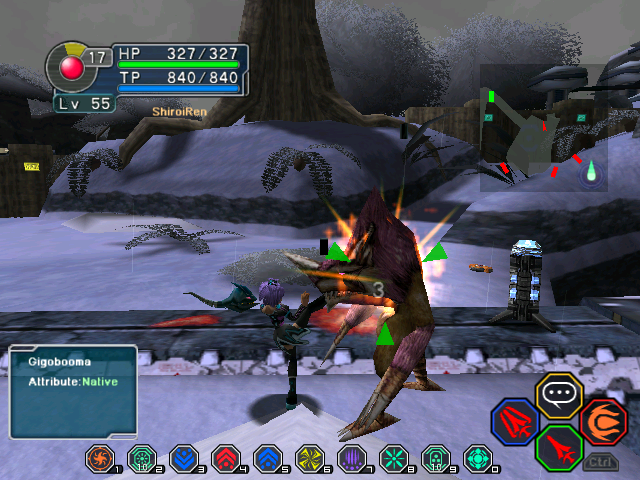