Starting the talking topic over again. I'll get rid of the last one(s) since old but not deleting them.

I'm not feeling well right now because some stupid coughing pathogen-packed worm keeps sitting in the spot I have to nearby me in college and now I'm infected because of that stupid bastard. Shit. It's only a matter of days before my condition worsens.

I hate people like that. Damn vermin have no respect these days. Ewww. I don't have much syndromes yet but I can tell by the start of it and I've been breached of those starting syndromes that trigger it, I'm pretty much screwed now and there's no meds around the house either so yup. I already saw the mockery a certian someone left about me btw (whatever), but she's right, I won't be around much because of this stupid fool who won't get away from me and stop that blasted virus-passing cough when I can't move. I I am around, not going to be able to do/say much, and gaming efficiency will be chopped. To warn you all early, expect to see me in sour moods far more frequently till I'm cured again.

Further to admit, I cut the bird square in the middle.... (the bird finger, stupidly got myself cut on a pair of scissors while trying to open a package. Blood & Punch don't mix.) Ouch to that one, and further to boot, I've been having quite a bit of trouble around the place much lately.

Well, enough the cold stuff. A good thing is that I mysteriously ended up with a 3M of meseta in PSO2, so that's good, but I have to make a hustle for the story modes before October 8th. I've no time for anything else atm.

But then there's this stupid virus trying to take effect on me now..... geez.

Also, if those of you who are registered here didn't get it already, I released the latest version of my character-self for Mugen as of yet since

's personal day. Was late but out now. I'll update my main site to leave an open link later when I'm better. Be sure to have a look when you have a chance because I'll be taking my radiant back offline very soon after.

Fun factor of the day: Someone on the highway was an idiot. There was a tire wreckage left in a lane which luckily we were not in, yet nearby. A buffoon tried to start speeding around us and so I counted the timing; we were away from it, one person quickly spotted and dodged it, a wacky broad in that same lane behind the smart person who dodged it went "BUMP!" right over it and I quickly looked over and saw that "ZOMFG!!" face as she quickly lost speed, but I think the wreckage flew up from behind her car and hit the chump trying to slither in front of us from that lane right in the window. PWNT!

The reaction of the person who got hit by that wreckage 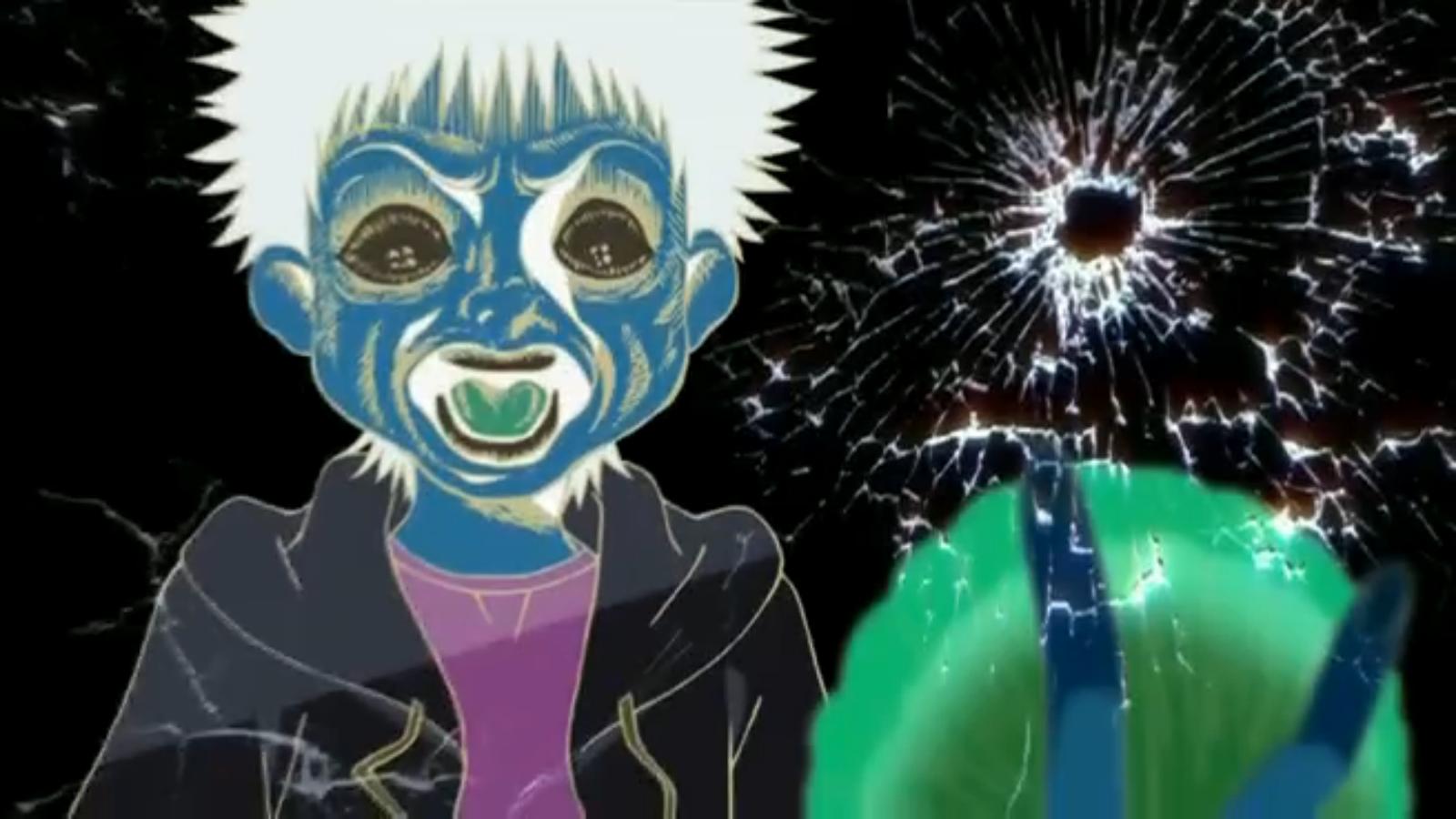 Yup, kind of like that one. Funniest part was the slinging hair and nobody got hurt.

Another LOLz-Monster Hunt around recently.

Okay so I did manage to find a working ROM version of the TRUE Monster Hunter 3 game itself on PSP. I got to St3.0 quests and that point one of my favorite-yet-annoying opponents (Rathian) is the stage boss qualification match ranker for stage 4.0 and so she left me one hell of a "hello!

" right in my face by screaming in my face (Stun-Roar) but then she turns around and deals with pesky Jaggi (replacement lizards over Velociprey) who were bothering her nest.... some dumb reason I went over and finished them off, then I was trying to pick something up. Ratian was just about to do a "Flying Bio-Dragon kick", but instead she went after a bug (lolwhut??) who was about to attack me from behind, killed it without busting it apart, and like an idiot I went to carve it (??) and again like the first duel we had, Rathian did not attack me but only stare at me then to charge at something else........

it is known that the handheld version of MH is kinda dumbed down XD
play the wii version :p

Actually I can't unless emulated, and even at that it's quite limited compared to that of the PSP versions to me personally (lagging and such), and to further be confused, I dunno if I could go to its online mode from emulation systems or not, I think the biggest answer was "No" so ouch at that one, boo.

i always fail attemp to do online on emulators making me give up :/

Dolphin has made pretty good headway with Wii emulation and I believe they're working on getting the games up and running with official servers.
_________________

I mainly use Dolphin for gamecube, not so sure if my pc could run a wii game at full spd, but it's funny seeing Custom Robo at 160% spd.

Depends on the Wii Games. You could always lower Anti-Aliasing or added effects to improve performance.
_________________

Ew Anti-Aliasing. I always have that off if I can.

Well, I had to take a look in PSO-World and was about to show a new blooper vid batch I was doing based of PSO2, and instead I find a fool trying to start up a topic about the most hateful junk-mode of many online games which turn me off on-sight the instant: "PVP idea anyone?" Oh HELL no!! I had to strongly object, there's way too many of those nuisance-games around and those quickly lose my interest, flashy or not! I rather enjoy a game where everyone hunts together, not hunt one-another! Jesus!!

That's specifically a big factor of why I choose PS series, MH series, and SHMUPs over all others usually; you hunt together, you fly together. It's all about getting along, utilizing teamwork and ending a crisis that threatens your world, not squabbling amongst eachother about who's more of a god damned show-off and actually teaching that other person to hate you and plan for betrayal! YUCK!! I've been through more than enough of those pesky kinds and I despise every single one!

Anyway though, away from something which is aggravating, I've been recovering over my infirmity as of lately ever so slightly. I also started up on blooper videos and decided to just bunch all of them up together into one mass "Stupid Files" set from all sorts of random things.

If CC2 smarted up and made an MMO of .hack would you play it if pvp was limted to duels on non pvp servers?

Never. If even shown ONCE, it condemns itself to the fact that there was such rubbish there in the first place and thus is not worth my time. Such filthy games with a junk mode such as that at all is unworthy of my life. They WILL force it in somewhere therein and if that happens, that will be an impossible quest, so nope. Sorry. Further of speaking of that, I had just added a new enemy to the block list at that site and even banned the name from here at this for supporting such a dirty idea.

I hate using the block list but here is yet another rotten body I encountered again who chose to force me to do it and forced me to also delete my explanation against such junk-modes that aren't needed whatsoever. I find it stupid for the thing to exist in the first place. What will one achieve from squabbling around murdering other innocent and helpless people? More enemies, blood spilled on hands, and hatred. As I said, those creatures who do such a vile act are no better than the monsters themselves if not else if worse that even a game's True Last Boss on the highest difficulty ever known.

I'm the kind of girl who rather hunt together with others if I have no other choice to save a world from a threatening crisis than waste her life dying to the hand of some pathetic vermin who's no better than a monster itself while having the fear of the natural beasts themselves already trying to rend my flesh apart as-is all at the same time, besides, too many games have that garbage-mode in it and don't even need it. The further facts are:
1- I am a MONSTER Hunter, not a Gladiator/Murderer.
2- I always go alone; nobody who I give a call to is ever there on-time if ever at all (0.03% late, 99.7% never plan to heed an idea to help)
3- If EVER able to be backed, PARENTS break the run and at the perfect timing; thus they make me look terrible and I often have to leave "groups" instantly and never return, or if not, the "group" which I am in like an idiot will clearly and consecutively ignore me 1000% of the time
_________________
Queen of Heavenly Solace. Cold to the core.
"Better to have a cold core than to not have one at all..."
http://www.google.com/profiles/109739034144757014503

.hack would be the only MMO i'd support PvP in and the only reason for thatt is to make it authentic, since the .hack games all have "pvp" in them.
Furthermore the only pvp I support in MMO's currently are one's designed specifically for PvP, like mobas. (League of Legends, Dota2, Infinte Crisis)

I see, well to admit, don't take my rough tone above earlier the wrong way. Personally however, I strongly despise those kinds because they are absolutely not fun at all on my tab, and the ones with PK'ing in them are out of the question; I will not even look at on the first note if I hear about that in a single occasion.

I'm currently repulsed at the idea of someone else thinking that a series which is made to get along in would want to put a garbage-mode such as that in it even in the first place at all. Good Lord! There's way too many of those kinds all over the place these days and they are all the same; unfun and annoying, even PVP games, no offense but I hate those with bitter animosity.
_________________
Queen of Heavenly Solace. Cold to the core.
"Better to have a cold core than to not have one at all..."
http://www.google.com/profiles/109739034144757014503

It's a Vita game.

Oh that game, I played my friends copy and just played the final boss fight, didn't even take a hit. Kinda sad that the final boss was easier then w/e boss i tried to fight before that.

Going to to a Sony Computer Entertainment event tonight as part of my job.

Make sure you get the enjoyment out of it and even a free console if they hand anything free to you! Have fun out there.

Play Warframe on it!!!

I got to touch the console

More serious note. It was much better than I expected. Games ran incredibly smoothly on it and it was well worth traveling up to see. Sony certainly pulled off what they said the PS4 could do* for the most part.

Spoiler:
*I found that Knack didn't run as smoothly. Seemed more like a 30fps game than the advertised 60fps. Asides from that, the PS4 ran very well.

: Biggest question: did you enjoy it?