Just a topic about some of the character sheet stuff. I'm just a clone so I can't do much here

Regardless, here's the FAQ about it, ideas are welcome but expect a small delay on mass system updates for it if it's approved.

The Character Sheet
This thingy is like a second profile on your own, nothing much except if you want to make an original concept character of your own here for later or personal references or whatever. There's some info to add there too, and also it does give you a secondary custom title to equip on your profile here and it will be visible to everyone in case you don't like the standard rank titles which I'm sure you don't when starting off with low posts (or you can just post around more, 'tis no point sitting like a bump on a log, as long as you don't be a big fat jerk or rulebreaker is all, lol!

) There are several items to add to it and are as follows for now:

1: Custom Image
This is your very LARGE avatar uploading spot so it's meant for something big, really big. It's recommended you have something over 400 * 400+ in size here. You could be otherworldly on size if you want but your character profile won't look very nice... so I recommend something at least between the previous note minimum and about 100*100 maximum in size.

-Warning!: There is one problem however which cannot be helped, there is a text limit to your file link, exceed this and your image won't be uploaded. Why? Because text got cut off. I've no idea why and it can't be helped yet.. sorry!

2: Race
This is your alter-ego's race (not in the usual, but in a more wide-open term) be he/she of an entirely different being; casual human, or perhaps elf-like? Werewolf? A killer Alien from the series Aliens? There's at least 15+ to choose from here, names should be self-explanatory but if not I will leave a short description of what's what, and they are listed as follows for now:
Human (casual bipedal organic beings from Earth, or some other worlds if any. They have two arms, feet, one head, one brain, capable of both good and bad potential),
Newman (Very similar to their human-counterpart and creators except with usually higher intellect at the cost of more frail physique and shorter lifespan, they are elf-like, usually noted by his/her pointy ears and often are seen using magical-like abilities which are Photons at most, and are often popular with the Phantasy Star saga, just like me!

)
Half-Beast (a bipedal humanoid who has primarily or even at least partial... but usually primarily beastly-like parts which are very visible. There are several types since they are yet another very popular race: wolf = Su Genérico werewolf

, and then their Cat-counterparts, the Neko, who aren't as popular except for Asian culture, and the rare Avians, who are them birdies! There's others as well but I won't list every single other here hence "Half-beast: Other" counts because maybe someone has a unique feature such as perhaps being an Elephant, or a rat, or even maybe an insect, too?)
Mecha (self-explanatory. "I am a machine!" - Raiden. Or you could be like Megaman-X, Zero, a Cast who is also seen in Phantasy Star, or even a Cyborg construct-o-bot. Could be as big as Jehuty, or as small as Crimrose. Either cause, you are full-metal, robotic ass-kicker who can ignore some mortal wounds unless hit at your weakspot, provided if you even had one at all.)
Bio-Metal (same as the Mecha, but more likely of the noted examples above who I mentioned. Partial Organic and Partial Machine, more like Raiden and Crimrose who aren't exactly 100% full-metal, but still are at most or less. Your organic part doesn't always have to be human-like, it could also be animalistic or anything else which is organic.)
-etc etc.
Default is "Human" when first generated. As in real life, you are only Human for now.

3: True Affinity
This tells off what kind of person you are and your judgment; ranges from Divine which is for holy and just causes to neutral in which you are apathetic toward most cases except whatever you choose, down to being a Malicious entity who's just plain downright evil as hell. Well, as a character that is.

4: Casual HP, MP stuffs
Classic. It doesn't matter really unless you want it to.

5: Job
あなたの古典的な、戦いの支配の一般的なスタイル。 (Your basic style of combat mastery at best) This is seen in every single game, especially RPGs. Current styles are as follows for now:
Warrior (

I'm a waving my big ass sword at that fine-looking watermelon you call your own little head, bitch! *swoosh swoosh!* Down you go, and oops your head fell off!)
Fighter or Brawler (My fists find your face quite sexy and wish to say 'hello there!' at full-speed! Like a good makeover at the boxing ring? Can't guarantee this will be painless when you'll be flying to the moon!)
Mage (

Watch it! Lady-Nuke came to town! You are so gonna go 'KABOOM' in a magical-powered Mushroom cloud in less than a second and not know where the hell that came from!! Whoops! You got nuked? too bad!)
Priest or Cleric (

Got a lost limb and no bandages? No problem! I could patch that without even getting dirty or touching you where it hurts; all healed, no screaming painful process required. Who needs items all of the time when I do all the repairs better than the lot of those expensive/cheap things anyway?

Be it magic; I can heal and kill anyone and anything as I please! I know how to use magic matter and it'll strike you down without me even having to take a single step unless I want to!)
Thief (Gonna mug your ass and kick it at the same time, you wouldn't even know you just lost something while just focusing on the pain... if even! Hell, You just won't know you lost something at all even without feeling the wind!)
Archer or Hunter (Surprise, stupid MF! Didn't see that Arrowstorm coming, did ya!? This will be worse than your classic Arrow in the Knee, it'll be through your brain!)
Shooter (High-Tech Archer of the future! At your service, I got teh Big Gunz! Easy to use and can sometimes go through the walls--wait? Can't find the key? I'll make my own 'door'! Say hello to Mr.Rocket Launcher!)
-there's more to check too!

6: Divine Force Type
Choose a small yet noticeable factor about yourself here out of good notes; Innocence? Glorious? Cool and Controlled self in the worse case? Highly Religious and faithful? (so am I too!) Very lucky when in most cases? Or rather not talk about it?

7: Dark Force Type
Same as to choose of one out of a few facts of yourself but this time the opposite; what's your poisonous note? Bad wrath problem? one who causes a Chaotic uproar amongst others or self? Personal qualms about something making you hold guilt? Major pervert? (I know I am... can't be helped there...

), Too arrogant to care about others? or rather leave it as a mystery?

9: Element
What's your prime element? Note that two may sound very similar yet are completely different! This is a list of every possible thing I can recall of even in real life to mythical: Fire? Water? Ice? Earth? Thunderforce(

)? <- lol well not EXACTLY... I mean real thunder, Wind? Light? Dark? Sonic wave? (yes SOUND is an elemental force too!), Mechanical? (yes Metal force too!), Divinity? (NOT light element! There is a difference between actual "light" and "Holy" here), Corruption? (not to be confused with "darkness", this is of pure solid "Evil" things), Bio? (not to be confused with "Earth" like relation, this is of more likely things dealing with lifeforce in ... like, poisonous statuses and such which is not exactly 100% earthly, but is emitted from the living creature himself/herself, more like blood I guess?),
Spiritual?, Chrono? (yes TIME is a entirely different element itself, too!) there's many, many more to be discovered!

10: Weapon Specs
Inspired by boss warnings from Thunderforce V; so if your character was to appear in a game as a boss, this tells your weapons loadout!
Example:You have like, maybe Devil Force Handgun x2 (HG1: Codename "Ebony", HG2: Codename "Ivory"), Buster Sword "Alastor" x1, Special: Transform Mode "Devil Trigger"... 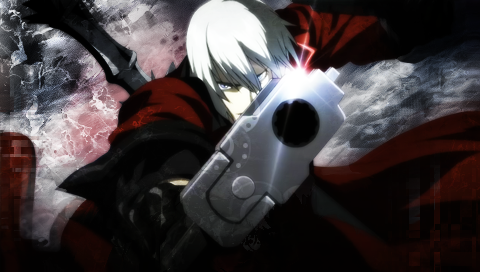 (lol sorry Dante, I had to use you for an example because you're very popular!

11: Artes Mastery
Inspired by Tales of series, this is your "command list" rollout roster. It consists of well, as many moves as you wish it to go for classed like in the Tales of * games. Why like that series? Because I'm aware you have one attack that is stronger that the other, then several many others even stronger that the next, up to your most fatal attack ever known in where you sadistically slaughter any foolish god-forsaken soul who dared stand up against you the wrong way only to find out what happens the hard way when they make you really angry and to witness divine punishment as you wreck judgment upon those who sinned against you! There's five levels in class of attacks on such a command list:
Basic move(s) - What you normally use as a generic attack which is weak when you're just smacking some rat(s) around out of your way in a hurry or toying with them.
Basic Arte(s)- Your generic special techniques! This is when you start to pull off something fancy, like a Hadoken or such which is your way of saying "okay, let's actually fight! Take one of my basic specials!"
Master Arte(s)- The upper-tier level of your special attacks, you tend to use these to actually hurt someone when starting to lose a few brain cells to getting slightly angry now!
Arcane Arte(s)- Your "hyper" moves in where you are clearly now saying "Okay buddy, now you got me angry! Take my dramatic super attack to your puny little head you bastard!" -- in where you use the dangerous moves that actually consume some power to deliver the pain to your opposition!
Mystic Arte(s)- Your "last resort" moves in where now you are furious, pull out your stop sign and emit supernovas, cause some small rips in space, and say "That's it! Now it's about time that you will DIE!!" --i.e: your most brutal attacks in where you MEAN absolute intention to kill and destroy with no mercy! The end-effector of your arsenal.

11: Personal Title
Visible on the forum to all members, this is your very own custom title! Only you, or an overlord (administrator) can change this at will at anytime, multiple times.

12: Radiant Name
Your alter-ego's name, only visible on your character roster.

14: Ex-Race
You can select another race for yourself, being interested in saying that you're a two-in-one of a kind breed, or can leave this as nothing. Default is "N/A" meaning no secondary.

15: Personal Quote
Just a personal line you can conjure up if you wish.

16: Social Tolerance
This tells off if you like to be in massive groups, or perfer to be a loner type. (I'm actually the somewhat shy type so I'm bad at going around in groups due to painful experiences from others by their choice on me... I'd keep it low-to-none for myself)