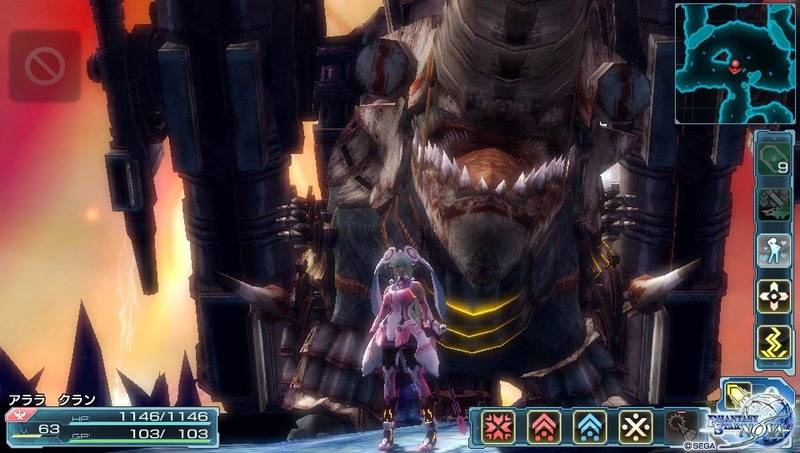 This is where it gets more like Phantasy Star meets Lost Planet and Star Ocean. It's mostly about hunting the big boys like this one behind me on a planet that doesn't want us going back home so easily. (as if planet Segomo wasn't bad enough; where the freaking planet itself wants to kill you!)

Anyway, there's several differences of this compared to PSO2.

Some examples:
-Sonic Arrow is more useful for hunters this time! It now pierces + Piercing combo + Stun! Way better than its origin!
-Safoie is now a "Knockback" instead of just a combo, this gives a mixed feeling.... sometimes knockback isn't too good...
-Foie now explodes over a wider zone,
-Over End no longer has super-armor mode!? Now that sucks!

Other things are to note:
The OST in PS-Nova is way better than PSO2!
Edge & Reimi share their equipment with you in this game (WHAT?!)


Now for talking about some bosses:
Stegosaurus-like Gigantess - He's tough at first, but I figured to stay AWAY from him and aim from behind.

Tentacle-Monster Gigantess - 2nd hardest boss in the entire game to a point; he's a decisive type of duel. Either one of us are going to go down very quickly at the fight; if I rip half of his arms off, he'll come crashing down and has the lowest defense of any Gigantess Boss so far that I know of here, but he also has a high chance to 1-shot kill me from a blind spot if I stray too far for too long, AND he's quick to pull it off!

Lampray-mouthed Gigantess -An annoying little miniboss who has a nasty double-barrel plasma cannon on his back and some swarmers to back it up. I found out the hard way he can't be captured either...

Spider-Formation Gigantess - 2nd least worrysome to a degree, but not to be underestimated! They go on groups and the leader seems to like to stay in the rear of the squad. Hard to miss that one sporting a huge cannon on his back!

Buzzsaw-Unicorn Gigantess - Dunno what to say about him much except I do know cutting it close with him is a deathwish, and unfortunately for me, he LOVES to use a snatching beam to drag me over to him at close range a LOT. I never planned to find out how much those several buzzsaw sword-wings of his do and I don't plan on it anytime.

Missile-Lobster Gigantess - God forbid! This son of a bitch is the WORST Boss in the entire game to me! I mean for crying out loud! Do you really need two f**king TITAN-CLASS Missiles just to kill a poor little FONewearl so cruely?? This sick excuse of a brute is LOADED with missiles, and he keeps pull out more of them each time! To admit, I hate this boss the worst, and dealing with him is a pain, his parts are hard to lock on to as well, let alone hard to reach. A fight with him usually drags on too long. Seriously, this Missile Lobster dude is the most annoying boss to me in the game so far!

Armored-Horns Gigantess - a nasty little miniboss who has a high rate to 1-shot kill ninja-fart on me (which he did the first time I attempted to impale him for capture chance) so staying AWAY from this son of a bitch is best.