Had to open a topic about Final Fantasy: Explorers as it's one of the only other Nin-10 games I got for that 3DS-XL. This topic will cover discussions of it in general, so feel free to speak whatever comes to mind about it.

Here's a screenshot cap of me in the game personally: 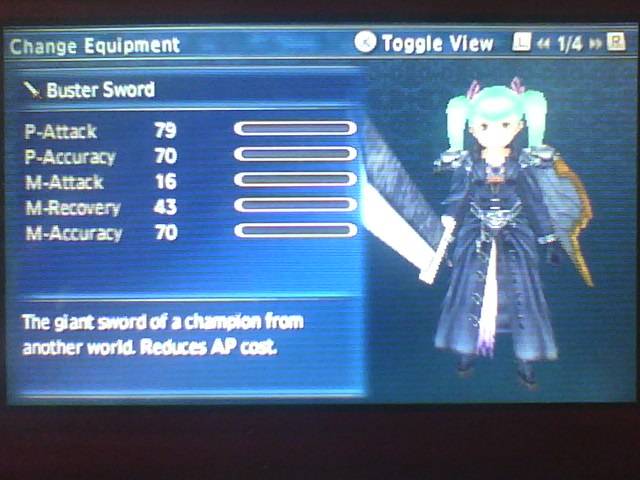 Yes, I'm naturally a girl in-game as well too (with crappy short hair....) and I'm wearing Sephiroth's attire, and using Cloud Strife's Buster Sword.... with ONE hand all the way through the game.

What's even more wacky is that actually I CAN turn INTO Cloud himself (what?!?) and go Omnislash, or Lightning and just blast away the competition, some other faces as well too, such as Aries/Aerith herself too (and in fact, I can make her outfit AND weapon too!) let alone enter Trance Mode AS her... "I can hear... the planet's voice." Oh and did I forget to mention that you also hear character's origin game battle theme too when AS him/her when one does enter Character-Trance mode?

Some other notes are that I'm not alone; I can do like in Phantasy Star and Monster Hunter, or (more likely) a certain Tales of * game and have MONSTER ALLIES to back me up while alone! But.... a bad side: Chocobos can't be ridden here anymore, lol! (well, because the chocobos there say "Nope, you can't ride me in this game, but I'll fight for you just as hard!" <- at the cost of 200 points required, so can only have ONE of these lovely birds out at a time... but fun!)

Some blights though:
-Chocobos can't be ridden here (already explained),

-You have to make a long move to the proper points of attack, so some quests will have you very far away from the attack point and this can be bad as well as annoying... try not to get lost or confused!!

I got this a little while back. Played it for a little bit, then stopped. It's a good game for little bursts of playing.
_________________
The mysterious young man who possesses unsurpassable skills in swordsmanship and airship navigation.

Oh so you do have it? Want to share FC numbers for later on? Message me when you're feeling up for it sometime later on.

Sure, though I recently started a new job, so I don't have much time to play (Work nights, so I'm asleep all day).
_________________
The mysterious young man who possesses unsurpassable skills in swordsmanship and airship navigation.

I understand, same here actually as well... on term though I'm at work in the day but sometimes it becomes an all-nighter, along with college going Tuesdays/Thursdays too.