I recorded mostly Luce and Ren going through these boss fights since we managed to get a camera and a wire connection for HD-TVs to connect to Luce's PSP.

Sorry, I couldn't help but laugh at how my G/f got bombed by her cat...

That laugh was me in the back.

Both her and Luce facing off a Plesioth Boss. Man those Genprey were annoying to him!

Such an annoying boss! King Shakalaka kept both of them on the move.

Oh BTW, is there a program that can convert parts of a movie into a GIF file?

: Okay so I didn't see that bomb coming, but well hey,
at least others got over two laughs out of this, even your voice was
caught in.

Hmm, well I might need both you and Luce on the next chance, I'll do some
blooper vids for MH as well and toss in a few "effects"! NO voices though
this time okay?! Not even a peep! You did well enough till that one and the
Velocidrome Boss fight when he also got counter-whacked back to the
stratosphere by Luce. (okay so I understand how that's actually hard to
do, especially when the enemies and bosses or even our own cats do so
many silly things lately)

And yes everyone, I did make an armor set that looks close to as seen in
Castle Shikigami 2 on Monster Hunter as well, I even took the effort to make
a Scythe of Menace and cover the negative criticals with Reckless Abandon.
I also have a black outfit, and another set that looks like Rachel Alucard
using a Black Parasol gun.
_________________ 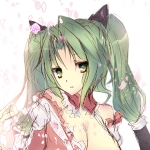 Time to update the roster, make sure you put these in the MH-Forums for Andra.

Posting the links to your newer vids here now.

Me vs the Giadrome (yes folks, I did this fight and she recorded it and hosted it on her YT)


Ren vs Bassarios (Full fight, includes the "Smart Turn" he used against her here which even got me baffled a bit):
https://www.youtube.com/watch?v=9DrhHLFsnoc&feature=channel (for some bad reason, the video won't show here directly.

Ultimate Blooper of Monster Hunter x Phantasy Star x Soul Calibur, music vid!
(We all did this one):


Luce & Len vs Bassarios (with me talking!):

Luce & Len vs Rathian (Capture Mission! Still being the announcer.):

...you've seriously got a big mouth on those two, but sound funny in a cute way.

Don't get any ideas with me just because I said that! Anyway, As for Ren, she was stupid to waste the farcaster at a bad time, and Luce should have carved later.


This is in spite of showing Kevin how to smash up this buffoon.