May be a while before we get the Vita version but for now we have the Xbox-360 version, thanks Vastell!

Anyway though here's our stats at the moment: 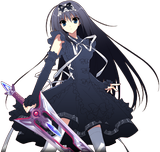 My Friend owns this, we played it for a bit with a third but he stoped and deleted it from his usb. I can't get him to reDL it and let me play it. So i'll just stick to Scott Pilgram untill he finally fucking DLs it.

I'm sorry to admit but I have to say this hilarious line I thought of last night:

*sigh* Nagi... you got infected by the demons, and with all that crazy power you used in Nightmare Mode you almost got the both of us, you even used Time Lag for a bigger advantage..... and.....???

Even though I missed, and expected to fail the game there...

You have just jumped into my Phantom Break Drive while I was on lag faster than a duck to water...

Okay here's what happened! I was as Soul of Mikoto, and Igarax Kuro was as Soul of Infinity (a Boss), and we went on the highest level of difficulty... I expected to fail the second-to-last boss fight since it was two-on-two, and that Fake-Mikoto wasn't goofing around whatsoever this time, did a lot of damage to me and then Nagi gets infected and turns into yet another boss who was insane at this mode and ridiculously fast! The two were dueling it out and used time lag with countless Hunter shots (Thunder Force series reference lol!

) which I was caught in the plasma storm. Nagi then uses Time Lag while the both of us were about to fail in one last hit, starts annoying Infinity but then she stupidly stops for 2 seconds, goes after me while I "failed" my Mystic Arte attack.... or so I thought I failed... the idiot QUICKLY jumps back into it behind me and "OUCH! DX " *plop!* while Mikoto was still looking pissed and "dragging" the attack on so I then realized that somebody did something pretty stupid on the opposite end....

So apperently my friend never uninstalled it, so we played it today, of course all of our data was missing so we started at lvl 0, after a few tries (and exiting and specing our chars) we managed to beat the first boss, and then continue thru the rest of the game in one sit down, (we left every now and then to spec our chars). He used Yuzuha and I used Itsuki. After that we decided to go thru normal mode again as a boss. So I was Nagi and he was Coco, we didn't get that far in but w/e.

Yuzuha tip- RB in air is a teleport and backstab downward.
Itsuki tip- after getting special atk 1 over A standing becomes a stun lock spam that actully has a block built in to the swing.